What Has Ken Wilber Been Up To Since Grace and Grit? After taking a hiatus from writing for several years after the events in the movie, Ken Wilber retreated to a secluded mountain top in Boulder, Colorado to resume his efforts to create the first credible, 21st century integral philosophy (really, true story!). At the end of an intensive three-year seclusion, in 1995 he published his career-defining magnum opus Sex, Ecology, Spirituality, which critics hailed as a startling new vision for a world of the new millennium. This was the book in which he first laid out his concept of holonic four quadrants, which set the foundation for his comprehensive, integrative “theory of everything”.

The response to the book was so overwhelming that Ken Wilber was approached by experts, leaders and other authors from around the world to start to institutionalize his ideas as a powerful way forward for the coming century. This culminated in the creation of Integral Institute, an academic think tank dedicated to applying integral philosophy to disciplines as far-ranging as business, economics and politics to sports, spirituality, sexuality and art. In 2007, Ken Wilber joined with Robb Smith to start Integral Life, which explores integral philosophy through real-world podcasts (like the seminal Integral Naked podcast), media and events to help people live a fuller, more integral life.

During this time Ken Wilber published Integral Psychology, Integral Spirituality, The Religion of Tomorrow, and several other books that advanced his groundbreaking philosophical project. Importantly, he also spearheaded the convening of world-leading experts and luminaries in events like Integral Spiritual Center, which examined the future and evolution of the world’s religions to a transrational, postmetaphysical foundation that could easily accommodate the findings of science and the values of postmodernism.

In the past ten years, Ken Wilber has continued publishing, speaking and educating, hosting such events as WhatNext, The Fourth Turning, The Ken Show, The Religion of Tomorrow and dozens of other projects. He also created the Full Spectrum Mindfulness training program, a practice-based distillation of his work that combines Eastern methods of "Waking Up' with Western methods of "Growing Up". A major tribute to his life was held in person in 2013, when hundreds of people gathered to honor the remarkable impact he has had in their lives and the historical impact his life will have on the world.

As of today, he continues to speak and publish through IntegralLife.com, where Corey deVos co-hosts The Ken Show, the only Ken Wilber podcast in the world. Ken Wilber lives in Denver, Colorado. 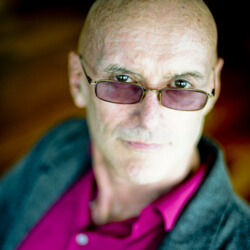 Ken Wilber is the developer of an integral “theory of everything” that embraces the truths of all the world’s great spiritual, scientific, and philosophical traditions. He is the most widely translated academic writer in America, with 25 books translated into some 30 foreign languages. Ken Wilber currently lives in Denver, Colorado, and is still active as a philosopher, author, and teacher, with all of his major publications still in print.

Often referred to as the"Einstein of consciousness studies", Ken Wilber is a preeminent scholar of the Integral stage of human development.

One of the very best ways to get to know the life and work of Ken Wilber is to check out his exclusive biography series, only available on Integral Life.

Featuring over 14 hours of stunning high-definition video, this collection allows you to experience Ken like you never have before as he shares intimate details about his childhood, his college years, and his personal and spiritual life. He also describes the first major phases of his writing career, some of his most important contributions, and how his thinking has evolved over the decades.

You will find Ken to be a masterful storyteller, weaving 1st-person narrative and 3rd-person philosophy together into a compelling, deeply touching, and often hilarious chronicle of his life—offering us a unique window into his extraordinary mind, his immense heart, and his tireless passion to leave this world just a little more whole than he found it.

If you are new to the work of Ken Wilber, you really could not ask for a better introduction, as Ken makes Integral thought and practice more accessible and entertaining than ever. If you are a long-time integral student, or just a big fan his work, you will see Ken in a whole new light as he shares stories that he has never publicly shared before.

This extraordinary biography series is available for free to all supporting members of Integral Life. Becoming a member also gives you access to our full library of discussions and presentations, updated weekly. It also gives you access to our full Integral Life Practice platform and live practice sessions, helping you to bring the staggering wisdom and clarity of the integral vision into your own life, work, and relationships.

Sign up to become a supporting member of Integral Life and receive your free copy of the Ken Wilber Biography Series today!