Wired magazine’s own “Senior Maverick” talks with Ken Wilber about some of the ideas behind Kevin’s blog The Technium, which explores the various ways humanity defines and redefines itself through the interface of science, technology, culture, and consciousness. Kevin also shares some of his own thoughts about the role of spirituality in the 21st century, going into considerable depth around his own spiritual awakening several decades ago.

The universe, we are told, is winding down.  Nothing escapes the remorseless grasp of the 2nd Law of Thermodynamics—and with each passing moment, our world, our solar system, indeed our entire galaxy slowly approaches its inevitable heat-death. But this is not the full story, for while the universe is winding down, it is also winding up, bringing forth new forms from old, adding new layers of complexity where there was once only an empty vacuum.  It is what Alfred Whitehead called the “creative advance into novelty,” referring to a distinct “tilt” of the universe toward more complexity, more significance, and more wholeness.  From atoms, to molecules, to single-cell and multi-cellular organisms, to the reptilian brain, mammalian brain, and the human neocortex—the universe is abound with inexhaustible creativity, pushing deeper and wider towards its own limitless potential.  Entropy and evolution: these two “arrows of time” exert their pull upon everything that ever is, was, and will be—one pulling us up toward the eternal light, the other pulling us down toward the infinite black.

But it is not just physical matter that is evolving!  Alongside the increasing complexification of the material world, evolution brings forth novelty in at least three other dimensions, particularly evident within human evolution: 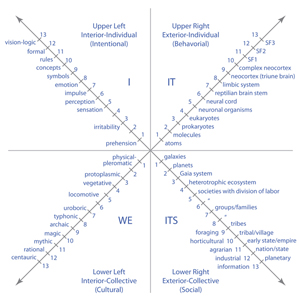 Taken together, we notice a rich mosaic of evolutionary emergence, in at least four important dimensions: subjective and objective development in both individuals and collectives. This gives rise to Wilber’s famous “Four Quadrant” map, one of a handful of basic components that comprise the Integral model. The Integral approach helps to reveal some of the deepest patterns that run through all human knowledge, showing the relationships that exist between physical evolution, systemic evolution, cultural evolution, and conscious evolution.

Whereas some consider consciousness, culture, and technology to be mere epiphenomena of biophysical evolution, the Integral approach highlights many of the fallacies hidden within such reductionistic views.  The Four Quadrants represent four distinct dimensions of the universe, all strongly correlating with each other, but not at all reducible to one another.  Consciousness cannot be simply reduced to the chemical soup between your ears, as scientific materialists might believe.   All truth cannot be reduced to cultural embedment, as post-modernists have claimed.  And all of our behaviors cannot be reduced to techno-economic conditions, as Marxists presume. There are simply more things in heaven and earth than are dreamt of in any of these partial philosophies—and the Integral approach essentially tries to get all of heaven and all of earth onto the table, without ever confusing a meadow for a cloud, a mountain for a star, or an ocean for a galaxy.

This, in many ways, is what Kevin’s Technium truly represents.  As he describes in his blog, Technium is a word he “reluctantly coined to designate the greater sphere of technology—one that goes beyond hardware to include culture, law, social institutions, and intellectual creations of all types. In short, the Technium is anything that springs from the human mind. It includes hard technology, but much else of human creation as well. I see this extended face of technology as a whole system with its own dynamics.”  The Technium exists at the interface between science, technology, culture, and consciousness, exploring the various ways humanity has defined and redefined itself through the ages.  Within the Technium, technology is not regarded merely as the lifeless artifacts created by a particular species, but as a living matrix of innovation—the infusion of consciousness into inanimate matter, which in turn shapes our personal and cultural experience of the world.

In this discussion, Kevin shares one of his most powerful experiences. At the age of 27, he slept on the supposed spot where Jesus was crucified, and upon awakening had a powerful spiritual experience.  Many people are aware of the fact that Kevin continues to be a devout Christian, which might defy some expectations of those who otherwise consider him extremely rational—trans-rational even—while pushing the vanguard of digital culture.  In many contemporary thinkers’ minds, spirituality is little more than a quaint vestige of antiquity, and once we transition from the mythic/traditionalist stage to the rational/scientific stage, there is no longer any room in the universe for God.

This, more than anything, has been the rallying call of the “New Atheist” movement of Richard Dawkins, Christopher Hitchens, and (to a lesser degree) Sam Harris.  But it is important to note that it’s not spirituality per se that the modern world should jettison, but the magical and mythical interpretations of spirituality that are transcended by the rational or postmodern mind. The present schism between modernity and spirituality does not need to exist, as long as we allow ourselves enough room to re-conceptualize what we mean by the word “spirituality.”

While nobly trying to dislodge humanity from the monolithic tyranny of fundamentalism, many modern and post-modern thinkers have inadvertently thrown the baby out with the bath water.  When Nietzsche accurately exclaimed “God is dead!” he wasn’t actually talking about God Him/Herself, but the mythic conception of God, along with all the dogmatism, absolutism, and ethnocentrism that follows.  While the mythic God was dying, the rational God was only just being born.  Possiby stillborn, some might argue, but born nonetheless—with both a pluralistic God and an Integral God close on its heels.

This is one of the most extraordinary insights of recent years: while the universe (and our experience of the universe) is constantly evolving, so is our spirituality.  It is a sad reality that spirituality remains such a confusing and controversial topic. How is it that religion has brought more liberation to more people than any other human endeavor, while simultaneously causing more pain and suffering than anything in human history?  As mentioned, both individuals and cultures develop through increasing waves of subjective and intersubjective complexity, from archaic, to magic, to mythic, to rational, to pluralistic, to integral stages of consciousness and culture, with infinite room at the top for future stages of unfolding.  This is the profound role religion can potentially serve in the 21st century—a sort of “conveyor belt” of consciousness, designed to facilitate growth through each stage of consciousness. 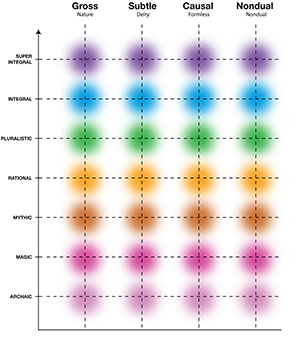 And this is an absolutely crucial point—you can taste God at any stage in your own psychological development, as these experiences are always available as ever-present states of consciousness.  However, your interpretation of the experience will be largely determined by what stage of consciousness you have achieved.  For example, a mythic/traditional person might interpret a spiritual experience as a revelation from a personal God intended solely for the “chosen people,” a rational/scientific person might interpret reason and mathematics itself as the language of a Deistic God (the “great clockmaker in the sky”), while a pluralistic/postmodern person might interpret his or her experience as emanating from Gaia and felt as a radical interconnectivity with the “Great Web of Life.”  This is demonstrated in the graphic to the right, known as the Wilber/Combs matrix, which plots four different types of commonly-acknowledged spiritual states against seven evolutionary stages of consciousness, yielding at least 28 different kinds of spiritual experience.  No wonder we are so confused!

Furthermore, just as we can look at evolution through three major perspectives (3rd-person physical and techno-economic evolution, 2nd-person cultural evolution, 1st-person conscious evolution), so can we view our relationship with the divine from these same three perspectives, sometimes called the “Three Faces of God”:

Approaching spiritual experience in this way does a great deal to help us understand the current state of the world’s ongoing inter-faith dialogue, as we can see that every spiritual tradition intrinsically contains all three of these perspectives, though certain traditions might focus on one more than the others.  For example, the Western theistic traditions tend to emphasize “God in 2nd-person” and are often distrustful of 1st-person experiences of the divine, whereas Eastern traditions like Buddhism tend to point to 1st-person realization as the ultimate means of liberation, while sometimes understating the importance of 2nd-person communion with Spirit.

Thanks to the information age, people now have unprecedented access to all the world’s knowledge, wisdom, and culture.  Never before has the world been so small—and yet, considering the absolutely massive amount of data now at our fingertips, the world has also never been so unfathomably huge.  We are drowning in zeros and ones, the digital reflections of our outer and inner worlds flooding our senses faster than any of us can metabolize.  Only a genuinely Integral approach can make sense of this deluge of information, an approach that acknowledges and situates the established methodologies of phenomenology, structuralism, empiricism, hermeneutics, systems theory, etc., without ever confusing the territory of one methodology with the authority of another.  In this sense, both Kevin Kelly and Ken Wilber are truly 21st-century pioneers, both of whom share an irrepressible drive to synthesize and integrate a truly staggering body of knowledge. Their work represents a new way of seeing the world, of relating to the world, and of being in the world.  They strive to identify the very real patterns in our universe, patterns that connect everything to everything else, and in so doing, helping to clear a path for the future of evolution in this lonely pocket of the universe.

Kevin Kelly is Senior Maverick at Wired magazine. He helped launch Wired in 1993, and served as its Executive Editor until January 1999. He is currently editor and publisher of the Cool Tools website, which gets 1 million visitors per month. From 1984-1990 Kelly was publisher and editor of the Whole Earth Review, a journal of unorthodox technical news.